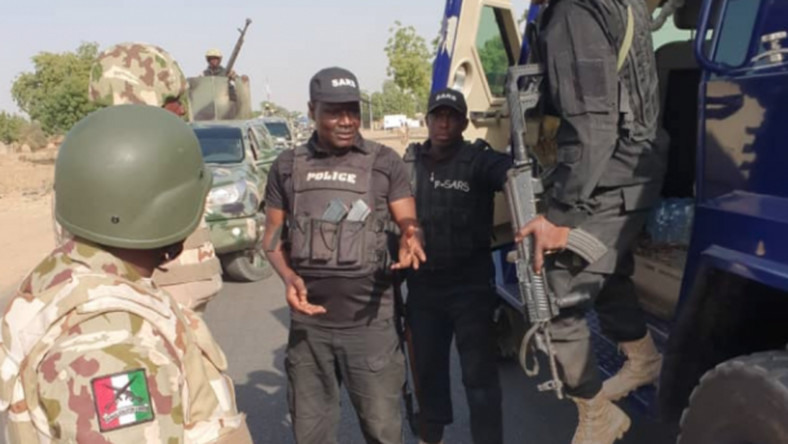 A SARS official who spoke on condition of anonymity stated that the combined police team spent over one hour battling the Boko Haram insurgents.
He explained that after the Boko Haram fighters beat a retreat, the policemen were attacked by soldiers, as they were trying to make their way out from the location.
The SARS operatives said his team members were shocked that the soldiers could attack them.
He said, “We were deployed in Mainok after we got the information that Boko Haram was operating there. By the time we got there, Boko Haram had killed some people and destroyed their houses.
“We engaged them in a gun battle that lasted for over one hour. We overpowered them and seized two of their Hilux vehicles and weapons. Surprisingly as we were on our way out, we were attacked by some soldiers. They fired several RPGs (rocket propelled grenade) at us… one of the armoured personnel carriers (APCs) given to us by the IG was partially damaged.”
The police source however said the officer who led the operation ordered his men not to fire back at the soldiers, adding that things got under control after a reinforcement team of soldiers from Benisheikh, a neighbouring town, got to the location.
In a video published by The Cable, the commander of SARS, Ibrahim Muhammad narrated how his men tackled the Boko Haram insurgents and the encounter with the soldiers
“When we got there, we saw them (Boko Haram fighters); their identity was not even in doubt. Some were even taking cover beside the wall. We were on them, we were charging in, charging out,” Muhammad said in the video.